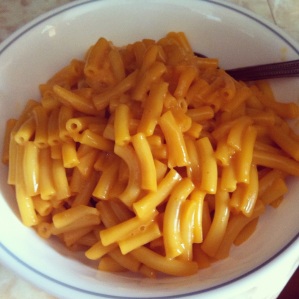 I have mixed feelings about the petition by a couple of food bloggers in the US for Kraft to remove the food dyes (yellow #5 and yellow #6) from their ubiquitous Kraft Dinner.

Initially, I was going to write a post about how frivolous I think the petition is. How removing food dyes from KD is not going to make it any less nutritionally void. You know, play devil’s advocate, ruffle a few feathers, because that’s what I like to do. While I do believe this to be true, and a part of me thinks that advocacy efforts could be put to much better use, I do also see some merit in their efforts. Realistically, people are not going to stop eating Kraft Dinner, or feeding it to their children. And you know, as an occasional treat that shouldn’t be a big deal.

Why does Kraft Dinner in the UK (and some other European countries) use natural food colourings rather than the artificial yellows used in Canada and the US? This is because their governments have decided to err on the side of caution. Where there is indication that a small number of individuals suffer allergic reactions from exposure to these colourings, and there is insufficient research to determine whether or not these dyes may have harmful long-term effects (such as being carcinogens) instead of allowing the population to unwittingly assume the risks they have taken steps to protect their citizens by banning these dyes. I’m all for that sort of initiative on the part of government. Oh sure, some of you might say that it’s a nanny state, we should be allowed to have our unnaturally brilliantly coloured nutritionally void food if we want to. You know me though, I like a good old nanny state if it’s going to be looking out for my better interests.

Sadly, our governments (in Canada and the US) are far more concerned with pandas and drones than the safety of our food supply. And that’s where efforts such as those by the bloggers become worthwhile. Yes, we should continue to put pressure on our governments to better regulate food additives, in the meantime if we can convince food manufactures to voluntarily remove these dyes from the foods they make then that’s a positive step in the right direction. So, while KD would not necessarily have been my first choice of food to target, if the formulation of this product is changed then hopefully the formulation of others will follow suit.

For more information on food dyes check out the report: Food Dyes a Rainbow of Risks by CSPI.

4 thoughts on “Will there be KD in the nanny state?”