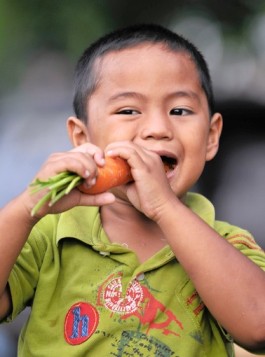 Have you ever struggled with getting children to eat their vegetables. If you’re a parent, you more than likely have. Parents, parents to be, grandparents, childcare providers, teachers, dietitians, etc. might be interested in learning about a recent study that took a slightly different approach, than the norm,  to getting children to eat their vegetables.

You’ve probably heard that it can take up to 20 separate attempts to get a child to eat a new food. so far the advice is usually just “keep trying”. I think that it’s also important to get children involved in food preparation whenever possible as their far more inclined to eat something that they had a hand in making. This study looked at using a conceptual framework to get children to eat more vegetables. The researchers hypothesized that children are often more intelligent than we give them credit for and, perhaps, simply telling them to eat their vegetables “because they’re good for them” isn’t good enough. The researchers surmised that if children are taught more specific nutrition information that they’ll be more inclined to eat their vegetables. They had some teachers read nutrition books to their students during snack time. Other teachers conducted snack time as per usual. After about three months it was found that not only did the children being provided with the nutrition education have greater nutrition knowledge than the students who were not provided with the education, they also were voluntarily consuming more than twice as many vegetables as when they started the experiment (the control group did not see a significant change in vegetable consumption).

Of course, we don’t know if vegetable consumption changed outside of snack time. Nor do we know if these dietary changes will be sustained. Even so, it’s worth considering teaching children more about food and nutrition, especially if a benefit may be consumption of more vegetables.