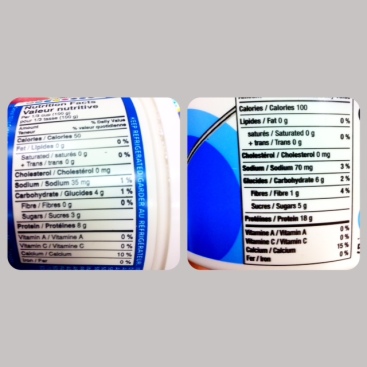 I’ve extolled the virtues of Greek yoghurt in the past. It’s a pretty great source of protein at up to 18 grams in 3/4 of a cup! Of course, once something gets popular you know that the knock-offs aren’t far behind. I think that nearly every brand of yoghurt now has their own line of Greeks on the market. Unfortunately, many of them aren’t actually Greek yoghurt.

What’s wrong with the “knock-off” Greek yoghurts? Well, they’re not strained. Instead of just containing milk and bacterial culture they add thickeners like carrageenan, corn starch and pectin to achieve a thick Greek-style creaminess. They also add milk protein to bump up the protein content but from the ones I’ve seen that still only puts them at 8 grams of protein per serving. That’s actually less protein than you’ll find in many traditional plain yoghurts. Most of them also tend to be targeted at the “dieting” community so they’re sweetened with artificial sweeteners. And lest you think “at least I’m still getting the calcium I would from traditional yoghurt” you’re probably only getting about 10% of the Daily Value.

If protein and a thick creamy yoghurt are what you’re looking for make sure to check the ingredient panel as well as the Nutrition Facts Panel to ensure you’re getting exactly what you bargained for. When it comes to yoghurt ingredients, less is definitely more.

*The photo above shows the Nutrition Facts for a traditional Greek yoghurt and a “knock-off” Greek. Can you tell which is which?