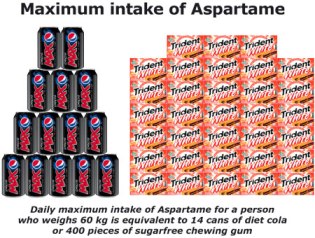 I made the mistake of scrolling through my Facebook feed the other day and then clicking “read more” when I came across this posting: A KILLER IN YOUR FRIDGE. To protect the innocent (or guilty, whatever) I’ve copied and pasted the text into a google document for you.

The gist of the post is that diet pop is the cause of most cases of lupus and many cases of what we erroneously believe to be MS. Oh, and tinnitus and fibromyalgia. Apparently aspartame becomes a neurotoxin, formic acid, when it’s heated to more than 86F.  Once people with these illnesses stop consuming diet pop many of their symptoms disappear and  number of them will make a complete recovery!

Shit like this makes me angry. Why give false hope to those suffering from what can be very debilitating illnesses just to further your crusade against artificial sweeteners? Does anyone know someone who suffers from MS and drinks copious amounts of diet pop? Maybe the people I know aren’t the norm but they tend to be extremely conscious of what they ingest and aren’t big consumers of diet pop. It seems to wrong to me to write propaganda such as this.

Unfortunately, I can’t seem to figure out where the post originated. It definitely wasn’t written by the person who shared it and it certainly reads like the story about the very sick sister is bogus. It reminds me a lot of the green coffee bean extract advertisements that appear to be actual journalism to some. If you google “a killer in your fridge” you’ll come up with a lovely mix of links stating that it’s a hoax and links to pages and petitions decrying aspartame and diet pop.

Googling the “Doctor” H. J. Roberts associated with the article I came across this post on snopes which thoroughly debunks the claims made in the Facebook post. While apparently true that aspartame will form formaldehyde in the body, the post neglects to mention that many other foods will as well, and to a greater extent. These foods include citrus fruits and tomatoes. Clearly there are many more deadly foods lurking in our refrigerators than just diet pop.

While I would certainly never recommend that anyone consume copious quantities of diet pop. I wouldn’t encourage anyone to consume any pop, diet or otherwise. I do think that diet pops can be beneficial. For those who are chronic pop drinkers and who are trying to lose weight, switching to diet pop can greatly reduce caloric consumption without risk of developing MS, lupus, or fibromyalgia, etc.

4 thoughts on “Do you know the killer(s) in your fridge?”