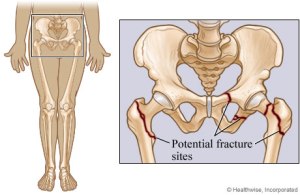 I recently saw someone touting the results of a study as indicating that milk consumption may increase the risk of bone fractures. Now, if you’ve been reading my blog for a while you’ll know that I’m not always on board with the promotion of milk. I question the inclusion of milk and alternatives as a food group on Canada’s Food Guide. However, I don’t believe that there’s anything inherently wrong with consuming milk (in moderation) if it’s a beverage that you enjoy. It’s certainly better than juice! Anyway… Despite my posts deriding “research” promoting the consumption of milk (usually of the chocolate variety) I lean towards siding with the milk-drinkers on this one.

The study looked at data from the Nurses’ Health Study and the Health Professionals Follow-Up Study in the US. Milk consumption of participants during adolescence was reported based on dietary recall ten years into the study. Considering that, depending on the study, participants were between 30-55 and 40-75 years of age at the start of the study, they would have been estimating their adolescent milk consumption anywhere from about 17 to 60+ years after the fact. Maybe it’s just me, but at 35 years of age I can’t recall how much milk I drank as a teenager. As dietary recall tends to be inaccurate the day following consumption I would hazard to guess that it’s even less accurate decades down the road.

“Participants were excluded at entry if they had reported a prior hip fracture, a diagnosis of osteoporosis or cancer”. I wonder if this exclusion affected the results. It would be interesting to look at the excluded participants to determine if they were milk-drinkers or not during adolescence. The researchers also divided the results into three groupings: those who consumed milk less than twice a week, those who consumed it once a day, and those who consumed it four or more times a day. Four or more times a day seems like rather a lot of milk to me. I would be interested to see the level of risk for hip fracture played out for those consuming the recommended number of servings based on the Food Guide (i.e. 3-4/day) also taking into consideration other foods from the milk and alternative group.

The researchers found an increased risk of 6% of hip fracture for each glass of milk consumed by men during teenaged-years (this was presumably over the average of 2.1/day reported). Interestingly, for women, there was no relationship between milk consumption and hip fracture risk. The researchers did rely on participants to report hip fractures so there may have been some degree of inaccuracy in the findings.

I think that this statement by the authors in the discussion is worthy of note: “it is not entirely clear that an early gain in bone mass will persist into adult years as the young skeleton is replaced through many years of remodeling, which may erase any initial advantage.” In other words, consumption of nutrients, and participation in exercise, which increases bone density when you’re young may not matter if you don’t carry on with these behaviours as you age. The argument here is less whether or not milk consumption during adolescence affects bone density and hip fracture risk during old age and more that it’s important to continue to be active and to consume foods that are rich in calcium and vitamin D as our bones are not static.