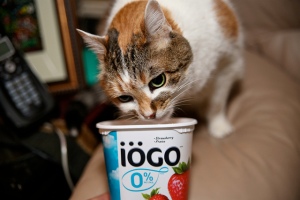 A friend of mine recently shared the news of a new study reporting an association between yoghurt consumption and decreased risk of type 2 diabetes.

The researchers controlled for a number of potential confounders. However, there’s always a remaining risk that an unaccounted for confounding variable might be the true reason for any observed effect. While the researchers reported a significant decreased risk of type 2 diabetes in regular yoghurt consumers they were also quick to acknowledge that this does not indicate causation. Yes, people who consume yoghurt appear to be less likely to develop type 2 diabetes than people who don’t. However, the studies all relied upon self-reported food frequency questionnaires and they were observational. It is possible that there is some unaccounted for variable that’s reducing the risk of type 2 diabetes in yoghurt consumers other than the yoghurt.

The researchers do make an interesting suggestion that the probiotics in yoghurt may be responsible for the decreased risk of type 2 diabetes. I do wonder about the validity of this as many yoghurts contain limited live bacteria due to their processing. In addition, it’s unlikely that many probiotics in yoghurt survive the acidic stomach environment to make their way to the intestines. Perhaps it’s the by-products of the bacteria in the yoghurt (e.g. vitamins, lactic acid) that are responsible for decreased risk of type 2 diabetes. Just postulating here. I would love to see a study in which participants are prescribed diets containing either yoghurt with live bacteria, yoghurt without live bacteria, and no yoghurt. Yes, it would take a long time to determine if the yoghurt reduced the risk of type 2 diabetes but other effects could be examined as well and it would be interesting to see what the true effects of  regular yoghurt consumption are on health.

2 thoughts on “Can yoghurt prevent diabetes?”