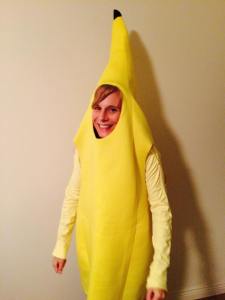 Not my usual uniform, I swear!

A couple of weeks ago the Globe and Mail published an article about the role of “nutrition experts” in grocery stores. It caused a bit of an uproar in the dietitian community for a couple of reasons: one, there was some conflation between nutritionists, dietitians, and naturopaths (if you don’t know why that would upset dietitians then you should read this); two, it poorly represented our roles in grocery stores. Following that, a dietitian published a blog in Huff Post in response to the inflammatory article in the Globe. As a dietitian who worked in a grocery store for several years and who was interview for, and quoted in, the original Globe article I feel obligated to add my belated two cents to the fray.

I actually had a really nice interview with Shawna, we covered a number of topics, and I felt like she was “getting” what I was saying. So, I was a little disappointed when I read the article and saw the quotes that she had chosen. Not to mention that I had asked that grocery retailer I worked for not be identified as employees cannot speak as representatives of the company, a normal PR policy, my job was not “retail dietitian”. I was a Wellbeing Counsellor, and as part of the interview I explained the different roles of the Wellbeing Counsellor and the in-store Dietitian. Wellbeing Counsellors essentially manage the Natural Source and Wellbeing Department in one store (ordering, stocking shelves, inventory, checking for out dates, dumping expired milk…). In addition, they are there to assist customers with any food, supplement, or nutrition-related question they might have. They also teach classes, do demos, and perform community outreach. The in-store Dietitian teaches classes, does demos, store tours, community outreach, and one-on-one counselling. They’re not tied to one department and they usually split their time between two stores.

In retrospect, Shawna was trying to push the helicopter parent/food police angle a bit, and I found it odd when she brought up orthorexia. While I agreed that many people are taking healthy eating to a whole new disordered level of “clean” eating, I suggested that dietitians (I’m now talking about those of us in both Wellbeing Counsellor and Dietitian roles) working in grocery stores can actually serve to combat this. I said that the food industry, the media, and society have made healthy eating far more complicated than it has to be. Dietitians in grocery stores can help you to look past the front-of-package label claims to the true nutritional value of a foods. They can help you make healthier, more delicious choices. They’re not there peering into your cart and judging what you’re eating. They’re not there to push products on you. No one ever told me to sell more of X or Y and as a regulated health professional I would never have done any such thing. Yes, obviously, grocery stores hire us to boost sales but it’s not by pushing products, it’s by having value-added service; by showing customers what they can do with chia seeds or by helping them find the product that’s best going to meet their needs.

When I said that comment about how people often think that dietitians only eat salad (and that we don’t, sometimes we eat candy or chips) it seemed to be met with some surprise. Especially when I insisted that I’m not in the minority; that most dietitians I know would say the same thing. That it’s important to eat a variety of foods and to allow yourself to have treats. I actually hate the term clean eating and am still hoping that my #eatdirty hashtag will catch on. If you’re not enjoying your food then you’re doing it wrong.

4 thoughts on “Step away from the chips, the grocery store RD is watching you”