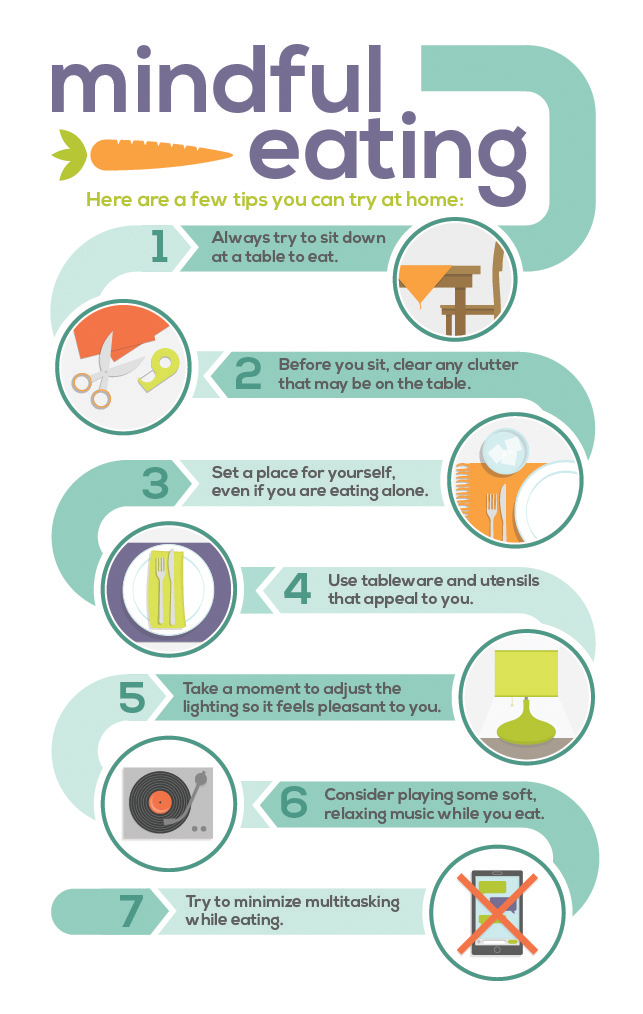 Image by Meliblair on Visually

A few weeks ago results of a study reportedly showing that chewing food slowly might prevent excessive weight gain in children hit the news. While it’s not exactly news that practicing mindful eating is healthy and can help with weight management I still had to check out the original research.

According to the authors: “The study’s goal was to test the feasibility of reducing body weight by teaching how to eat at a controlled pace and stop eating at satiety”. They did this by recruiting children and adolescents (between the ages of 6-17 years) through an open invitation to parents of children at a school in Mexico. 54 children were placed in the study group while 36 were in the control group.

There was no weight criteria for participation in the study and parents were advised that the study was not intended to alter diet or meal size.

All participants were given an hourglass to time their bites (30 seconds per bite) – it’s unclear whether or not this means that the control group was given an hourglass. They, and their parents, were also given a guide on how to follow the program,

appropriate weight by age, main causes of obesity or dyslipidaemia in children and adolescents, complications of obesity such as diabetes and which foods are recommended and not recommended for healthy growth. Instruction also promotes eating a home-cooked meal at the table.

eat slowly, using the hourglass as a guideline; drink water before starting to eat (possibly avoiding sugary drinks); do not talk and eat at the same time; no repeated portions; no overfilling; no eating or snacking between meals; and no eating off the table. The control group did not receive any instructions.

The average weight and BMI of the children in the adhering group decreased over the 12-months of the study while both measures increased in the non-adhering group. Weight of the control group increased, however BMI decreased. Somehow this was interpreted to mean that counselling children to chew each bite for 20 seconds can prevent obesity.

Here’s where my concerns come into play. I found it interesting that the average height of the non-adhering participants actually decreased during the first six months. This suggests to me that the sample sizes are far too small to provide any meaningful reliable data. These are growing children and can’t shrink. If the average height was shown to decrease during the study this means that the average weight and BMI results could also be easily affected by the attrition of just one or two participants. That is, we can’t say with any degree of certainty whether or not the weight reduction seen was a result of the intervention or just a lucky coincidence.

I’m also not so sure that it’s positive for us to see a weight reduction among these participants anyway. These were not obese or even overweight children. The average BMI of the children in the adhering group was 23.7 to begin with. This is perfectly healthy. Yes, we want to look into measures to prevent obesity but I don’t think that we can say that weight loss among a group of healthy weight children is prevention of obesity. The non-adhering group and the control group were already at lower BMIs to begin with (20.5 and 21.5, respectively). Despite both of these groups gaining weight, they were still at healthy BMIs after a year (21.3 and 20.3). Interesting that the non-adhering group fared “worse” than the control group. While likely not statistically significant, this does bring me to my greatest concern about this research.

Rather than teaching children healthy relationships with food, I fear that studies such as this only serve to promote disordered eating among children. Sure, family meals are great, as is mindful eating. However, timing each bite and scaring children with the consequences of obesity, labelling foods as “good” and “bad” does not foster a healthy relationship with food. While I’m sure that the researchers meant well, I truly hope that we don’t see this study expanded and replicated as the authors are aiming to do.

One thought on “Is slow chewing a way to prevent obesity or foster disordered eating?”