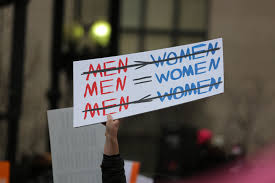 I know that paying any heed to articles on The Rebel is the same as reading Breitbart or repeatedly lighting myself on fire but I just can’t resist responding to this article purporting that feminism has “fuelled the obesity crisis” because come fucking on. And who knows, maybe there is a small segment of the population who reads my blog and that site and maybe, just maybe, I can get them (you?) to reconsider their opposition to feminism.

Perhaps we should begin with a refresher about what feminism is. Feminism is the “the advocacy of women’s rights on the basis of the equality of the sexes.” Feminism is the belief that men and women should receive equal pay for work of equal value. Feminism is not the belief that men are inferior to women. Feminists are not a bunch of man-hating female nationalists. We are men and women who do not believe that people should be denied opportunities on the basis of gender. Feminism is not about putting men down but about lifting women up so that we can all attain our goals.

Okay, now that we’ve got that out of the way, let’s talk about the connection between feminism and obesity. Supposedly, because women are working at paid jobs more than we did in the glory days of the patriarchy we’re not slaving away in the kitchen to put nourishing meals on the table for our families. Hence, we are reliant on fast food and ready-meals that are making our families fat.

There’s little doubt that we are (as a nation) far too reliant on take-out and highly processed foods. I don’t believe that this is the consequence of feminism though. Nor do I believe that taking away women’s jobs and relegating them to the kitchen is the solution. This suggestion that women are to blame for obesity only serves to make working mums feel guilty and sexists to feel vindicated. Sorry but I’m not buying it. Correlation does not equal causation. Women working more outside the home may correlate with rising obesity rates but so do lots of other things like hydro bill rates, college tuition rates, drug poisoning rates, etc. Just because two things are correlated doesn’t mean that there’s any relationship between the two. Reliance on processed food is likely a factor in developing obesity but it’s not the only factor. Obesity is a complex multi-factoral issue with no single cause.

I might add that men are perfectly capable of cooking as well. You want me to believe that men are superior and yet they can’t manage to boil a pot of water or cut up some vegetables? Come on now. I know I’m only a woman but even I can see the flaw in this logic. Everyone can, and should, get cooking and women should continue to do whatever jobs they damn well please.

3 thoughts on “Is feminism making us fat?”