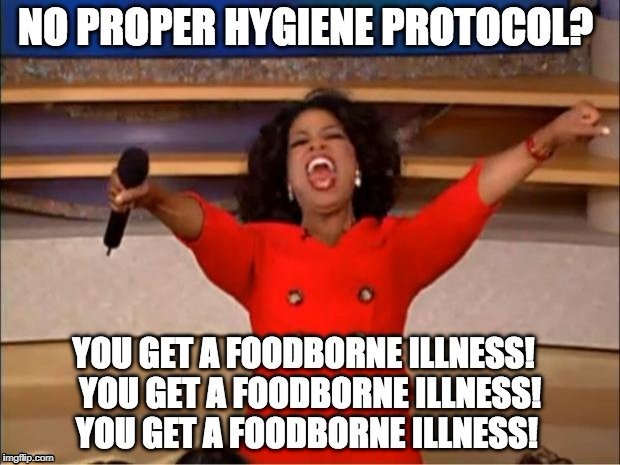 Oh hi. Sorry for the hiatus. I went on vacation and then I didn’t really feel like blogging. I’m still not sure that I do, to be honest. It kind of feels like an obligation. I’m much more fired-up about the Ontario budget that was released last week and the sense of impending doom accompanying the fall federal election than I am about anything nutrition. However, I have been thinking about a topic for a little while, and that’s food safety.

I was watching the Big Family Cooking Showdown on Netflix – which I highly recommend by the way, especially season two – and was disturbed by some of the lack of hygiene that I saw. There were people with long hair that wasn’t tied back, people fixing their hair and not washing their hands after, people crying and wiping their eyes and noses with their hands and then continuing to cook. Not to mention the few times when foods, including meat, were served not fully cooked. Now, these aren’t professional chefs, they’re just home cooks, but I still feel like the producers should have ensured that safe food handling practices were followed.

On a similar note, a recent study found that there is inadequate food safety information provided in many Canadian cookbooks. Considering that most cookbook authors are not food safety experts this really doesn’t come as a huge surprise. I think that either they themselves lack the food safety knowledge required to impart that information on the readers or they simply assume that these things are common knowledge. Unfortunately, given the lack of food literacy in the general population (consider the recent hullabaloo about people eating undercooked chicken fingers) I don’t think it’s safe to assume that safe food handling practices are common knowledge. To be fair, where do we think people are learning this information? Not in schools where mandatory home economics were cancelled in Ontario (and most other provinces) in the 1990s. Not at home where the majority of parents are no longer cooking meals for the family most nights of the week.

So, what’s the big deal? Why was I grossed out by the behaviours of some of the contestants on the cooking show? Why am I possibly never attending another potluck in my life? It’s because these unsafe food handling practices can make you sick. Health Canada estimates that between 11 and 13 million Canadians suffer from foodborne illness each year. The majority of these cases are linked to foods prepared at home, not from restaurants.

While I am not a food safety expert, I have completed food handler training and I regularly teach the basics at cooking classes. Here are a few of the most common unsafe food practices I see:

It’s one thing if you want to take the risk of eating unsafe food yourself. Perhaps you won’t follow all of these rules yourself (although you really should). It’s a whole different matter when you’re making food for other people. Please heed safe food handling practices! For more on food safety checkout Fight Bac!

5 thoughts on “The dark and dirty side of cooking shows”