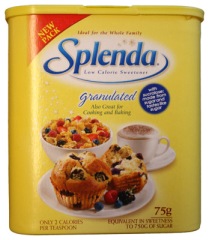 I’m starting to think that the sharing of research results is like the telephone game. Researchers publish their articles in journals, slightly (or more so) misleading press releases are issued, news articles are published, these are then shared via social media. Frequently, by the time the information has filtered through these channels, you’re left with a much different message than the original study provided.

I recently read this article that stated “artificial sweeteners affect metabolism and insulin levels”. Now, if you go back to the original journal article, you’ll see that this is quite misleading. The authors found that sucralose (not all non-nutritive or “artificial” sweeteners) had an impact on blood sugar levels and blood insulin levels following a glucose challenge.

Seventeen participants who were not regular consumers of non-nutritive beverages, did not have diabetes, and were classified as obese were given a glucose tolerance test following the consumption of water on one occasion and sucralose sweetened water on another. Increased levels of blood sugar and insulin were observed following the glucose challenge given after the sucralose consumption. However, the blood glucose levels were not all that different (4.2 + 0.2 and 4.8 + 0.3 mmol/L). The insulin levels were about 20% higher following the ingestion of sucralose.

Other things that I would like to note about this study: there were only 17 participants. This is quite a small sample size (although slightly better than the ones Dr Oz was basing his recommendation to consume vinegar to prevent diabetes) which means that we can’t be certain that the results seen were all that meaningful. There is power in numbers and to be sure that a treatment is truly having the effect you’re observing you need lots of participants. In addition, these participants were not regular consumers of sucralose. Perhaps a different result would have been obtained had they tested individuals who regularly consume sucralose sweetened products. Finally, the study only included obese individuals (the average BMI was 42.3). Would the results be the same for healthy or overweight individuals? What would the results be had tests been done on participants who had type 2 diabetes?

Yes, it’s interesting that sucralose may have an effect on blood sugar but this study is not definitive and it’s definitely not reasonable to extrapolate the results to include all non-nutritive sweeteners.

I saw this tweet: “Add 4 teaspoons of vinegar to your diet daily to lower your blood sugar. This may help prevent diabetes #OzTip” from Dr Oz the other day and I immediately thought “blog fodder!”

The effect of vinegar on blood sugar levels is perhaps the best researched and the most promising of apple cider vinegar’s possible health benefits. Several studies have found that vinegar may help lower glucose levels.

However, they carry on to state that:

a 2007 study of 11 people with type 2 diabetes found that taking two tablespoons of apple cider vinegar before bed lowered glucose levels in the morning by 4%-6%.

Umm… if this is the best evidence they could come up with then I’m not so sure about using vinegar to lower blood sugar. 11 is an extremely small sample size. As it turns out, most of the evidence supporting the use of vinegar for blood sugar control comes from very small studies. I found one study that compared the consumption of vinegar, vinegar pills, and pickles in 27 people (so, only nine in each treatment group). They found that vinegar had a modest (0.16% in HbA1c) lowering effect on the morning blood sugar of participants while those consuming pickles and vinegar pills actually saw a slight increase in HbA1c. The other study I found was even worse. It included only 11 participants (I think that this is the one the WebMD article was referring to). They found that fasting blood sugar was reduced by 2% in the control group and 4% in the group ingesting vinegar at bedtime. I also think it’s interesting to note that this footnote accompanied the study:

The costs of publication of this article were defrayed in part by the payment of page
charges. This article must therefore be hereby marked “advertisement” in accordance
with 18 U.S.C Section 1734 solely to indicate this fact.

Yes, these results are interesting but with such small sample sizes they’re essentially meaningless. Until larger studies are able to produce similar results I don’t think that advising anyone to consume vinegar at bedtime for blood sugar control is prudent.