Today I just want to rant a little bit about the patriarchy and research, particularly in relation to mothers and pregnant women. You’ve likely all heard about the difference between men and women when it comes to heart attacks, leading to missed diagnoses in many women, and how most drug trials are done using men so that we have very little evidence regarding the efficacy and side effects of many medications on women across their lifespan.

Then you see results of studies like this one which, despite the cognitive effects of alcohol consumed during breastfeeding no longer being evident when children are 10 years of age, provides the message that breastfeeding women should not consume alcohol. This despite the fact that alcohol is removed from breastmilk at the same rate as it is from the bloodstream. This means that while pumping and dumping is an ineffective measure to prevent infants from consuming alcohol via breastmilk that mothers can still safely consume alcohol and breastfeed provided they allow for adequate time for alcohol to clear from the milk. If you’re a breastfeeding mum, you can use this table to determine how long you’ll need to wait after drinking before you can breastfeed your baby (unfortunately, it might be longer than you would think).

Women who are of childbearing age are often told not to consume alcohol at all. Just on the off chance that they might get knocked up and damage the fetus before they realize that they’re pregnant. Women who are pregnant should definitely never consume any alcohol at all because their baby might end up suffering the effects of Fetal Alcohol Spectrum Disorder (FASD). And yet, many perfectly healthy babies are born to women who consume alcohol during pregnancy, indicating that there is likely a window (or windows) during which a certain amount of alcohol may be consumed without affecting the development of the fetus.

Pregnant women are shamed for drinking coffee, and some have even been refused coffee by baristas (and they say dietitians are the food police!). This despite the fact that pregnant women can safely consume up to 300 mg of caffeine a day (about the amount you’d get from a grande coffee). And the fact that the research on caffeine consumption during pregnancy is mixed.

Naturally we want to exhibit an abundance of caution when the health of the woman and the fetus/infant are potentially at risk. However, I bet that if men were the ones giving birth that we would know exactly how much of all these things could be safely consumed during pregnancy and breastfeeding and the precise windows during which they needed to be avoided. But because (cis) men don’t give birth or breastfeed but they generally conduct most of the scientific research we are told to err on the side of caution. I mean what do they care if we can’t have a beer for 30 or so years because we might get pregnant at some point during that time, or enjoy some lovely brie because there is a teensy risk that we might get listeriosis and miscarry. As long as we are protecting their offspring that’s all that matters. And if a woman dares to defy all of the dietary restrictions placed on her during pregnancy societal shaming will cause her to toe the line. After all, questioning these restrictions shows that you are an unfit mother and selfishly putting your enjoyment of bruschetta ahead of your own child for whom you should be enthusiastically giving up everything for while your husband is out drinking with his buddies.

Please note: I am not suggesting that women who are pregnant reject all of this dietary advice. There are very real risks to consuming these foods and beverages during pregnancy. I am however suggesting that we reject the unquestioning acceptance of these restrictions because you know that if men were the ones getting pregnant there would already be a body of research into precisely what could be consumed when. 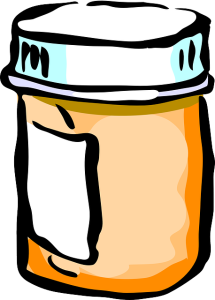 Image from pixabay, used under a Creative Commons Licence.

One of my dietitian friends alerted me to this new product, caffeinated peanut butter, the other day and suggested a blog post might be in order.

Now, I love peanut butter. I also love coffee. Heck I even have a jar of vanilla espresso flavoured peanut butter in my cupboard right now. But I still fail to understand why anyone would ever think that caffeinated peanut butter would be a good idea. It boggles my mind.

According to their website,  this caffeinated peanut butter is for you if you’re stuck with only access to horrible coffee or don’t want to lug your bodum camping but want to avoid those pesky caffeine withdrawal fuelled headaches. Essentially, if you’re seriously addicted to caffeine, instead of considering cutting back, you can just tote a jar of peanut butter around with you everywhere. People with peanut allergies be damned.

I don’t know about you, but I don’t mind bringing along a bodum or percolator when I’m camping. They don’t take up a whole lot of space and on chilly mornings a hot beverage is going to hit the spot a lot more than a spoonful of peanut butter. And if you’re so tired that you’re nodding off behind the wheel get off the freaking road. I find it horrifying that people might be popping spoonfuls of peanut butter while driving to prevent themselves from falling asleep at the wheel.

What’s even scarier about this product is the fact that a single serving contains 150 mg of caffeine. I’m assuming that a single serving is the standard two tablespoons. That’s a lot of caffeine in a little peanut butter. Considering that most people probably use more than that (sadly, I can’t find any statistics indicating how much people usually spread on their bread) you could easily be getting upwards of half the daily recommended maximum dose of caffeine (that’s 400 mg, or about three 8 oz cups of coffee) in your PB&J alone.

Despite the warnings on the website about not feeding the peanut butter to your dog, I worry about the potential for children to consume an excessive amount of caffeine if they were to get their hands on a jar. A single serving of STEEM contains more caffeine than children at any age can safely consume. Lest you think that I’m overreacting, there can be serious consequences to caffeine overdose; including, seizure and death. Even without overdosing, we don’t know what the long-term effects of caffeine consumption in children are. We do know that adequate sleep is essential for good health and that most children are not getting enough sleep. Caffeine consumption can be used to counteract the effects of insufficient sleep, in turn leading to decreased sleep at night, and can quickly become a vicious cycle. We also don’t know what the long-term physiological effects of caffeine exposure may be in children.

As far as I’m concerned, the answer to the question “who is STEEM for” is no one.

Doctors Nova Scotia created this great infographic showing the effects of energy drinks on kids. Bear in mind that energy drinks are not a good choice for adults either! 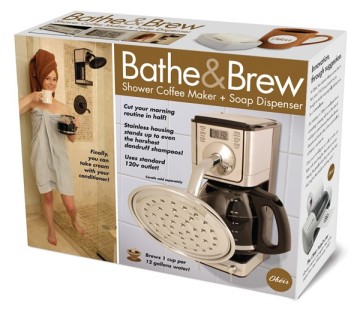 Have you ever heard of caffeine-containing body wash and soap? I’d heard of using coffee grounds as a fat-reducing, exfoliating scrub before (spoiler: rubbing coffee on your body will not help you lose weight, it does exfoliate quite nicely though but also makes a mess in the tub). Anyway… Until last month I’d never heard of caffeine-containing body wash. Silly me, I should have known that it would exist.

Upon hearing about it, naturally, my first question was if we could even absorb caffeine topically. As it turns out, yes, we can. Of course, my next question was whether or not one could absorb enough caffeine from a body wash to have any appreciable effect. Short answer: probably not. The study in the previous link showed that about 50% of caffeine applied topically can be absorbed through hair follicles and caffeine shows-up in blood after only five minutes of topical application when follicles are open. A nice warm shower would ensure that your follicles are open for maximum absorption. However, I don’t know about you but I don’t really want to stand around for at least five minutes to get a little bit of caffeine from my soap. I’d hazard to guess that for the amount of time that most of us spend covered in soap suds that we’d absorb very little caffeine from our soap.

While caffeinated soaps and body washes may make a fun gimmicky gift for the caffeine aficionado in your life, if you really want to keep them awake you’re better off giving them some good old-fashioned coffee beans.

Well, I honestly didn’t see this one coming: Pepsi has launched a new Mountain Dew breakfast beverage called Kickstart. In the official press release the company states: “Kickstart presents a fresh alternative to the age-old morning question of “coffee or juice,” by offering the best of all worlds. It combines the great taste of Mountain Dew with five percent real fruit juice and just the right amount of caffeine.” Ummm… what? This sounds like neither coffee nor juice to me. Coffee is so much more than caffeine and 5% juice does not sound much like orange juice to me.

Clearly I’m out of touch with the average Pepsi consumers who told the company “they are looking for an alternative to traditional morning beverages”. Even if this is what they were asking for, I’m not sure that 5% juice and 92 mg of caffeine in a soda were exactly what they had in mind.

Kickstart will be available in stores (at least in the US, I’m not sure about Canada) toward the end of the month in both orange citrus and fruit punch flavours. Personally, I plan to stick with my coffee.