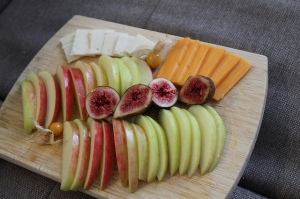 Not long ago I had the pleasure(?) of overhearing a conversation about digestion over a meal. One woman was explaining why she wasn’t having carbs at her her meal (this despite the fact that the hummus she ate certainly contain carbohydrate, as did some of the vegetables with her meal). Her logic was that to aid digestion it’s better to consume food groups separately. Hence, she was just eating vegetables and meat. Someone else piped in that this made sense and added that eating foods in a specific order must also be beneficial. I did my best not to bite off my tongue and eat it along with my vegetables, meat, and (gasp!) rice.

Not everyone knows about how digestion works and I can see how these myths perpetuate. But please give your body some credit; it can handle more than one macronutrient at a time.

I’ve addressed the issues of food “layering” and combining before. Just a quick reminder: digestion starts in the mouth with amylase breaking down starches. Your stomach does an excellent job of churning all of the food you eat, breaking it down, and making it into an acidic stew. Believe me, nothing is sitting in there on top of everything fermenting. Most of nutrient absorption occurs in the intestine. Consuming more than one food at a time may actually aid in nutrient absorption as some nutrients, such as the fat soluble vitamins ADEK, need other nutrients to be absorbed (in this case fat).

This doesn’t even address the fact that many foods taste better together. Think: chocolate and peanut butter, apples and cheese, bread and butter. There’s no need to deny yourself the pleasure of these foods. Variety is the spice of life and choosing healthy foods is complicated enough without adding the element of what to eat with (or without) something else.

I’ve had a number of people mention to me about testing vitamin quality by attempting to dissolve them. While this seems like a good idea, initially, upon further consideration, I can think of a number of flaws with attempting this at home.

The Consumer Lab provides a step-by-step guide to testing the disintegration of vitamins at home. They recommend putting the pill in water warmed to body temperature and then stirring continuously for 30 minutes, maintaining the water temperature. Unless the pill is chewable, enteric coated, or timed-released, it should break down. The implication is, if it doesn’t, it’s not breaking down when you ingest it and your body isn’t getting the nutrients from it. But, there are some problems with this premise.

First, your stomach is a highly acidic environment. Stomach acid usually has a pH of 1.5-3.5. Water, on the other hand, has a pH of about 7 (i.e. neutral). If you wanted to mimic the conditions of the stomach, you would need to use warmed lemon juice, or a similar acid.

Second, creating a warm, acidic environment isn’t enough. Most vitamins are recommended to be consumed with food. During digestion, the stomach releases a whole host of digestive enzymes which work to break down your food, and some of them would likely also have an impact on breaking down any vitamin and mineral supplements. Together the stomach secretions and jumbled-up food forms “chyme” which is generally ready to leave the stomach after 1 to 4 hours. That time-frame gives your vitamin a whole lot longer to break-down than the 30 minute warm water home test does. The stomach also secretes “intrinsic factor” which essential for the absorption of vitamin B-12 (don’t forget to add that to your cup of body temperature lemon juice).

Third, digestion doesn’t end in the stomach. After the chyme moves from the stomach to the small intestine which is actually where most digestion takes place over 3 to 10 hours.

Fifth, have you ever shat out an intact vitamin pill? Unless your body’s stashing whole pills somewhere along your digestive tract, it’s probably safe to say that it’s being broken-down along the way.

Sixth, just because a supplement is breaking-down in your body doesn’t necessarily mean that it’s being absorbed. Determining that it dissolves in a cup of warm water won’t tell you if you’re obtaining any nutrients from it.

A relative recently forwarded me a chain email that she had received several times, suggesting it might be useful blog fodder. The subject line read: Eating Fruit – In Perspective. The message was rather long so I’m not going to paste the whole thing in here. I’ll just give you a summary of the most salient points.

According to the email there is a Dr Stephen Mak who has been curing cancer patients using an unorthodox method. Apparently the trick is to always eat fruit on an empty stomach. “If you eat fruit like that, it will play a major role to detoxify your system, supplying you with a great deal of energy for weight loss and other life activities.” Not only that, “graying hair, balding, nervous outburst, and dark circles under the eyes – all these will NOT happen if you take fruits on an empty stomach.” The article then states that eating fruit on a full stomach causes it to “rot” and “ferment” in the stomach causing gas and bloating.

The top hits of a google search for “Dr Stephen Mak” are sites deeming the fruit email quackery. It also appears that there is no such person as this Dr Mak. There is no reason to believe that cancer can be cured simply by the timing of fruit consumption. It frustrates me to see misinformation such as this being shared with desperate people. Eating fruit after a meal is not going to give you cancer.

Finally, it’s a common myth that eating fruit on a full stomach will cause it to rot and ferment. Think about it though… Your stomach is always churning your food around during digestion. It doesn’t matter what order you consume it in. The fruit is not going to sit on top; it’s going to get all mixed together with everything else you’ve eaten at that meal and all of your gastric juices. There is no possibility that it will rot in your stomach.

The only positive aspect of this message is that we should eat fruit.

It is possible for an individual to be deficient in digestive enzymes, however, unless you have an underlying condition causing the enzymatic deficiency it’s a waste of your money to buy and consume digestive enzyme supplements. The most common enzymatic deficiency is lactase deficiency. Those who have lactase deficiency are unable to digest the milk sugar lactose and are known as “lactose intolerant.” Generally people with this condition will avoid foods containing lactose (or risk gastric pain, gas, and diarrhea) or take a lactase pill before consuming these foods. Sufferers of conditions which damage the pancreas such as pancreatic cancer, pancreatitis, and cystic fibrosis may also be deficient in digestive enzymes. That being said, most people do not suffer from pancreatic enzyme deficiency and have no need for digestive enzyme supplements. Your body releases these enzymes as part of the natural digestive process. The only digestive supplement that might be beneficial to much of the population is Beano as we all lack the digestive enzymes necessary to digest the sugar (oligosaccharides) in beans. However, the more frequently you eat beans the less gassy they’re likely to make you.

I’ve also heard mention of the importance of food enzymes. These are present in all raw foods and are really of no importance nutrition-wise. They are broken down during the digestive process like any other protein. There are other good reasons to include raw vegetables and fruits in your diet, such as destruction of heat sensitive vitamins. However, there is no need to go to an entirely raw food diet.