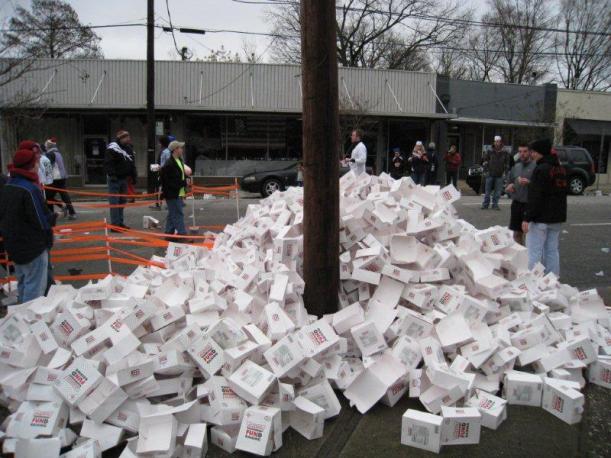 I feel like I’ve heard about the Krispy Kreme Challenge before but I’d never really paid it much attention. The other day, a post by Canadian Running caught my attention. It was about the challenge and I clicked on the link to read the full article. I have to admit that I actually had a feeling of revulsion as I read that participants in this challenge must consume 2, 400 calories worth of doughnuts and run 8k to complete the challenge which is a fundraiser for a children’s hospital (#facepalm). In case you missed my earlier rants about fast food charity, here’s a taste.

A someone who loves to run (I’ve run over 400 days in a row and am currently training for the Boston Marathon) and who loves to eat doughnuts, and sometimes even combines the two, I am not opposed to doughnuts. But the idea of eating 12 doughnuts, equivalent to 2, 400 calories, whether during a run or not seems like too much of a good thing. Considering that I would probably burn just over 400 calories on an 8k run, I would be ingesting an excess 2, 000 calories, essentially all of my calories for the day with none of the other important nutrients. In fact, I would have to run a full marathon (42.2k) to use the energy from all of those doughnuts. Curious how many calories you would burn during the Krispy Kreme Challenge? Check-out this calculator.

This sort of challenge just feeds into the (false) notion that you can compensate for whatever you eat through exercise. Because it’s for charity, you’re left feeling good about feeling ill from eating far too many doughnuts and running a relatively short distance. If you want to support the hospital, make a donation. This challenge is a total doughNOT.

This article is a collaboration between Diana Chard (Halifax) and Rhonda Major of You Defined. A response to the article posted in National Post: Swapping Starbucks for sit-ups: Toronto researchers offer coupons as incentive to exercise You can also read this post on Rhonda’s blog at: youdefined.ca

My twitter friend Rhonda Major alerted me to a new plan to use doughnuts (sort-of) as a reward system for exercise. The headline read: Swapping Starbucks for sit-ups: Toronto researchers offer coupons as incentive to exercise. She questioned if she was the only one who thought it was an absurd offer. After reading the article I was quick to let her know that she was not alone! As the researchers seem to compartmentalize exercise and nutrition we thought we should combine our knowledge on the subjects and write a joint blog post in response. After all, food and fitness do not exist in isolation and pitting them against one another does a disservice to ones health.

Before we get into it, a little bit about what the researchers are doing. Their theory is that getting people to exercise will greatly reduce the burden on our healthcare system. Even if people don’t lose weight through exercise they will still be more fit than if they were just sitting around on the couch. As an incentive to get people exercising, the researchers are offering coupons to Starbucks, Tim Hortons, Second Cup, as well as travel, movie, and grocery vouchers. In response to the question of whether rewarding people for exercising with coffee shop coupons is appropriate a professor in a department of exercise stated:

“We have published many papers dealing with the fit versus fat hypothesis, and it is very clear that fitness is far more important than fatness as a predictor of mortality. Those with CVD [cardiovascular disease] who are obese but physically fit have a far lower risk of dying during follow-up than normal weight people who are not fit,”

Yes, we know that it is possible to be healthy at (pretty much) every size. However, I don’t think that this is a valid argument for providing fast food vouchers as a reward for exercising. There are a number of problems with this plan. You may argue that people don’t have to use the coupon to buy doughnuts. They can use their coupons to purchase black coffee or green tea. Sure, they can, but they’re also being placed in the position of having to make that choice. We already face so much temptation with treats being presented to us at every turn, we must make hundreds of decisions about food every day, why would we want to add to those decisions? In addition, using food as a reward is a terrible pattern to get into. As a dietitian I always recommend that people find other things that they enjoy to reward themselves with. Food is already a complicated emotion-laden territory for many people, there is no need to contribute to this by using coupons for food as a reward for exercising.

It’s also false that you can out-exercise a poor diet. By placing an emphasis on exercise in this intervention, and by offering food as a reward, the researchers are essentially implying that what people eat is unimportant to their health. This isn’t just a matter of weight, although part of it is. People do tend to consume more calories than they burn after a work-out. This is why exercise is often seen as secondary to food when it comes to weight management. It’s certainly important to good health but, for most, has very little effect on body weight. Also, we’re not just talking about weight here; we’re talking about health, and we’re fooling ourselves if we think that we can eat scones and drink pumpkin spice lattes all the live-long day and still be healthy. Consuming a variety of foods, especially fruits and vegetables, is essential to achieving optimum health.

Reunite Your Body With The Joy of Movement

Exercise can’t compensate for a poor diet. Straight goods, what you feed your body is the ultimate outcome for your body.

For the body to be physical, to initiate movements such as accessing your leg muscles when you run, cycle, walk: this requires solid nutrition. When the body is fatigued from lack of nutrition, it does not operate properly.

For almost half a century now, we have been creating a negative environment for the will to be physical human beings. Not only do we spend at least 50% of our day strapped to a chair in front of a computer or other electronic gadget, we then loath going out and being physical.

How many times have I heard clients or people on the street complain about the fact that they have to drag themselves to the gym. Here’s where our thinking about activity and the body creates a disconnect.

How can we get everyday folks to get excited about moving their bodies again? It’s all that we have on this earth and we are allowing them to erode. We have lost our fun, our will to play and be free in our bodies.

If you hate the gym – great – don’t go to the gym. There are so many other options for keeping the body physical everyday. Walking to work. Taking the stairs at work. These things may seem trivial, however when strung together it can mean the loss of 10+ pounds per year. It means circulating oxygen and blood properly in the body.

It means being happier. It means not craving sugar and crap as incentive.

We have to make moving fun again. Doughnuts are not the answer.

Rhonda Major, owner of You Defined believes that training needs to be approached from a multidisciplinary perspective. She started off as You Defined’s first client over 10 years ago when she decided to radically change her life. Rhonda is a certified Yoga Instructor, Personal Trainer and Nutrition & Wellness Consultant. 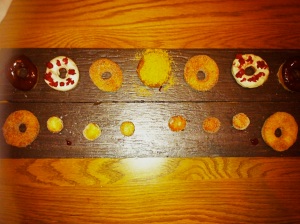 It’s national doughnut weekend! Something I think I inherited from my dad (when I was little he used to buy classic cake doughnuts as a treat) is a suppressed love of doughnuts. Naturally, the best doughnuts are those made fresh although I remember enjoying them from the freezer as well. I think that the best doughnuts I ever had (pictured above) were at a restaurant in Ottawa.

I’m not sure that you can make a truly healthy doughnut but if you’re just having one as an occasional treat (I’m thinking like once or twice a year when I say that) then it’s really not a big deal. If you want to try making a somewhat healthier version of a classic doughnut you might want to give this Baked Doughnut Recipe a try.