I was disappointed to see an article by an RD extolling the virtues of consuming more low glycemic index (GI) foods. I’ve written about the GI before and how glycemic load (GL) is much more relevant when looking at the effects of a specific food on blood sugar. Even so, I don’t think that GL is all that useful (for healthy people) when making food choices in the real world. Sure, you can use it as a tool for selecting foods if you want. There’s certainly no harm in using the GI (or GL), but it’s complicated and frankly, would be a significant pain in the ass to be looking up the GI of every carbohydrate containing food on your grocery list. I mention carbohydrates because the article that prompted this post didn’t, perhaps assuming that everyone is already aware that GI is only relevant to carbohydrate containing foods. Just in case you weren’t, I don’t want anyone walking away with the impression that this is a way to push meat, fat, or a low-carb diet. Although, that would certainly make it whole heck of a lot easier; avoid carbs and thereby avoid high GI foods.

In case you couldn’t be bothered to read the older posts I linked to above. Here’s the gist of it: some high GI foods can be quite healthy (think: watermelon, baked potato, many crackers), and some low GI foods can be quite unhealthy (think: chocolate bars, corn chips, and ice cream). Should we all eat less watermelon and more chocolate bars? Probably not. The other thing about GI is that we don’t generally consume foods in isolation. So, while bread can be high on the GI it’s unusual for most of us to eat bread by itself. Usually we’d have it as part of a sandwich or toasted with peanut butter. Consuming higher GI foods with lower GI foods and fats and proteins helps to mitigate the effect on our blood sugar.

Okay, now that I’ve shat all over the GI what’s an easier way to make healthier choices? And here we go, back to the not so sexy RD style… Choose more whole foods. When choosing processed grains like breads, go for the whole grain options. Try to incorporate two foods groups when you have a snack. For example, cheese and crackers, veggies and hummus, banana and peanut butter, an apple and almonds, snack bars that contain nuts (not just oats and sugar), yoghurt and muesli, you get the idea. Healthy eating doesn’t have to be complicated. 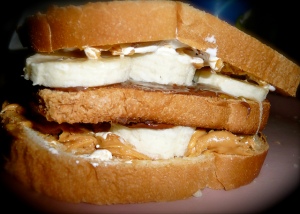 After I wrote about the utter nonsense of food combining last week I had a reader contact me to suggest that perhaps I could elaborate on the positive side of food combining. To be clear, this is not what is traditionally meant by “food combining” which is a complicated way of eating which erroneously is believed to aid digestion and is more based on not eating certain foods in conjunction with others than with eating a variety of foods together.

I mentioned in my previous post that combining some foods can be beneficial in terms of absorption. Fat soluble vitamins (ADEK) need to be consumed with fat in order to be absorbed. This is one of the many reasons that a low-fat diet has been decried by dietitians. Skimmed milk with added vitamin D? No sense to it unless you’re washing down a croissant (or an avocado, nuts, or other fat-containing food of your choice).

As my astute reader pointed out, there’s also the benefit of glycemic control imparted by eating certain foods together. As any reader of Wheat Belly can (and likely will) point out to you, whole wheat bread has a higher glycemic index than white sugar. The thing that’s not taken into consideration when latching onto that fact is that we rarely eat whole wheat bread in isolation. Turn your bread into a peanut butter and banana sandwich or chicken salad sandwich and you’ve altered the glycemic load of the meal because you’ve added other macronutrients. Consuming fat, protein, or fibre can all help to mitigate the effect of carbohydrates on blood sugar. This is why, if someone with diabetes is experiencing low blood sugar it’s much better to give them candy or juice than a chocolate bar. On the flip-side, this is why most dietitians will recommend that you consume two food groups at snacks. Having a piece of fruit and a few nuts or cheese and crackers, berries and yoghurt, veggies and hummus… will help to prevent a spike in your blood sugar and keep you feeling full for longer that if you were to just have a piece of fruit. It also helps you to meet your nutrient needs if you include a vegetable or fruit as part of your snack.

The International Scientific Consensus Summit on Glycemic Index, Glycemic Load and Glycemic Response resulted in a consensus statement that, among other things, proposed consideration of the inclusion of glycemic index/load on nutrition labels. As a dietitian I can see how that information might be interesting and useful. However, I’m not so sure that it would be all that useful to the vast majority of consumers. Most people struggle with label reading as it is and adding GI information (which can be confusing) will just complicate matters. It’s also just one of many factors to take into consideration when selecting foods.

A high glycemic index rating doesn’t necessarily make for an unhealthy food (think watermelon). Just as a low glycemic index rating doesn’t necessarily make for a healthy food (think agave syrup). This doesn’t even get into the complication of the difference between glycemic index and glycemic load. let’s just say that GL has more meaning and leave it at that. Another consideration: we don’t eat most foods in isolation. Bread has a fairly high GI but how often do you eat a slice of bread by itself? Most of us will use it for a sandwich or toast it and spread peanut butter on it. The addition of low GI foods mediates the effect that high GI foods have on your blood sugar. I also foresee such labeling as another opportunity for the food industry to mislead consumers (think “gluten-free” and “cholesterol-free”). Health-washing processed foods so that people can feel better about buying their low-GI agave sweetened corn puffs.

Nutrition has already become far too complicated. I don’t think that we need another number on packages to make things more complicated for people. A good rule of thumb: avoid foods with packages altogether as often as possible.

It seems like more and more people are turning to gluten-free or wheat-free products as a panacea, regardless of whether or not the avoidance of gluten or wheat is warranted. There are a number of books and advocates for such a diet; the primary one being Wheat Belly. Not having read the book myself (although I suppose I will have to remedy this at some point – I just don’t want to actually pay money to do so) I can’t comment on it directly. My current approach to dealing with zealous converts is to state that consuming too much of any one type of food is not a balanced diet and that most of us could benefit from consuming a wider variety of grains.

Anyway… A fan of the book enthusiastically told me that whole wheat bread causes a greater spike in blood sugar than a chocolate bar does. This did nothing to convince me of the evils of wheat. However, I can see how it might help to persuade someone who doesn’t fully understand the concept of the glycemic index (GI) and glycemic load (GL).

The GI is “the blood glucose response of a given food compared to a standard (typically; glucose or white bread).” It’s how rapidly your blood sugar will increase when you consume a particular food (containing 50 g of carbohydrate), as compared to a simple carbohydrate which is easiest for your body to convert into sugar. A GI of 55 or less is considered to be low, 56-69 is medium, and 70 and above is high. However, GI only considered the form of carbohydrate in a food, it failed to take into account the fact that people may not (and often do not) consume foods in quantities that will provide them with 50 g of carbohydrate. Thus, GL was developed. The GL is “the amount of carbohydrate in a food multiplied by the glycemic index of that carbohydrate. The result is then divided by 100”. The GL is a percentage; the lower the number the less overall impact the food actually has on your blood sugar. Less than 10 is low GL, 11-19 is intermediate, and more than 20 is high.

Let’s compare that whole wheat bread and chocolate bar. One slice of whole wheat bread has an average GI of 69 and a GL of 9. One ounce of chocolate has a GI of 49 and a GL of 9. Whole wheat flour is finely ground so it’s rapidly converted into blood glucose. Even though chocolate has a lower GI than bread it actually has the same GL depending on the quantity consumed. Clearly, there is no reason to demonize bread based on this data alone. GI and GL are just a couple of small tools in food selection. Different sources will provide you with different figures for the same foods. In addition, the GL for one variety of whole wheat bread may vary significantly from another. The other foods you consume at a meal will all provide different GLs so unless you’re eating plain bread or bread with just jam on it, knowing the GL of your bread isn’t all that useful. Also, gluten-free and wheat-free breads have similar GI and GL profiles to whole wheat bread rendering a switch to these products for this reason alone unnecessary.

If you’re considering going wheat- or gluten-free because it’s the trendy thing right now you might want to reconsider. Unhealthy gluten-free products are a rapidly growing industry. Instead, consider consuming a wider variety of grains and try to consume more grains in as close to their natural state as possible. Some to try: wheat berries, buckwheat, wild rice, millet, groats, barley, etc.

*All figures taken from Perspectives in Nutrition by Gordon Wardlaw and Jeffrey Hampl (no APA or MLA here. Take that university education!)