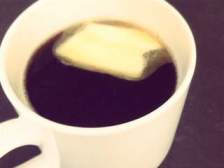 After seeing Mondays blog post on buttered coffee, a friend sent me a link to another blog post about adding butter to coffee. Unfortunately for me, I was reading the post on my phone, skimmed through the middle, and read the end conclusion that you should “TRY IT!  You won’t be sorry.” As it turned out, that quote was from an earlier post, which in my haste and on my iphone, appeared to be a continuation of the first post. This lead to a long and painful “discussion” on twitter with the author of the original post.

The author actually did reach a (somewhat) similar conclusion to that reached by Lindsey: “I think that the potential long term increase in cholesterol-related counts, despite my low carb diet, would ultimately be unsustainably unhealthy…for me.” This was on the basis of a personal case study in which he maintained his regular diet and changed nothing other than the addition of four tablespoons of grass-fed butter to his morning coffee.

Now, the author also states that he leads a healthy active lifestyle: eats mainly paleo, strength trains, and does and jiu jitsu. After removing the butter from his coffee he saw an improvement in his blood work. Even though I’m glad that his results supported our conviction that adding copious amounts of butter to one’s morning coffee is a nutritional nightmare, I still don’t think his experiment holds much credence. He admits that this was not a double-blind study. However, I don’t see this as being the issue here. The issue is that it’s an experiment with one participant. Yes, the results are interesting but they’re unlikely to be applicable to the vast majority of the population. Most people don’t consume diets similar to his. Nor do they exercise regularly. Imagine what the results of the blood panel of the average North American drinking Bulletproof coffee in an effort to lose weight would be after a month!

The only people I can see experiencing any benefit from consuming coffee with butter would be those suffering from anorexia or other conditions leading to excessive weight-loss.