I have a few things I want to say about GMOs as there seems to be a lot of confusion regarding them and I’ve had a couple of people suggest related topics for blog posts.

1. The Arctic apple was approved for production by the FDA and the CFIA a few weeks ago. Some people are pretty excited about this because it means that you will now be able to slice or bite an apple without having to worry about unsightly enzymatic browning. I mean, god forbid that your apple innards not be a pristine white. Am I the only one who finds it ironic that this was approved at the same time as everyone’s expressing such enthusiasm for “ugly” vegetables and fruits?

It’s this sort of use of genetic modification that makes me particularly angry. The primary argument in support of GMOs is that they will help to feed the world through hardier higher yielding crops. An apple that doesn’t brown is going to be of no benefit to people living in drought stricken regions. It’s not going to help alleviate the hunger of anyone except the food manufacturers who think that apples need to be pre-sliced and packaged in plastic pouches at exorbitant prices. Did you know that an apple comes with a lovely natural protective skin on it and that it can be sold intact? Did you know that you can eat an apple without slicing it first? And that there are kitchen tools called knives that enable you to slice an apple yourself if that’s your preferred method of consumption. Come on. Creating an apple that doesn’t brown when exposed to the air should not have been a priority for engineers. Do something worthwhile.

2. Non-GMO is not the same thing as organic. Based on the current definitions, all organic foods must be non-GMO but not all non-GMO foods are organic. Organic foods must also be grown without the use of synthetic pesticides. Which leads to number three…

3. Mamavation’s top 10 reasons to feed your family organic which are basically a list of lies. One and two being true (although not necessarily good reasons to feed your family organic) and the rest, aside from number six, being misleading at best and completely false at worst. 3. Organic foods have been found to contain residual pesticides. Organic farmers are permitted to use pesticides, they just can’t use inorganic (i.e. synthetic pesticides). In addition to those pesticides, organic crops also become contaminated with inorganic pesticides through air, rain, and soil contamination. 4. Have you ever looked at any of the packaged organic foods in your local supermarket? Products containing preservatives are plentiful. While they may not contain artificial flavours or colours this doesn’t make them nutritionally superior. Natural fallacy anyone? Beaver anal glands (can’t miss an opportunity to mention them!). 5. No antibiotics or hormones. You won’t find these in any Canadian milk regardless of whether or not it’s organic. In fact, you’ll only find hormones in beef and antibiotics in some animals (1). 7. There is no evidence, despite numerous studies, that organic foods contain more nutrients than non-organic foods. 8. Better taste. How to argue with subjectivity? I have had some delicious organic foods and some that taste terrible. I think that freshness and variety are more important factors in flavour profile than organic is. 9. Support the farmer and the farm. Organic is irrelevant here. I think that she’s confusing conventional agriculture with factory farms. Many smaller farming operations may be organic without being certified organic, they may also not use organic practices. You can also buy organic foods that come from large-scale farming operations. A better suggestion: buy local, know your farmer. 10. Reduces pollution and saves energy. Again, this is confusing farm-scale with organic and conventional farming practices.

While I’m not a supporter of genetic modification, I’m even more opposed to ignorant fear mongering.

Last week consumers of organic produce got their knickers all in a knot over news reports of pesticide residue being found on “organic” produce. Now, I thought that we all knew by now that purchasing organic produce didn’t guarantee avoidance of pesticides. Apparently not.

Just a reminder… Organic food is not grown in isolation. There are pesticides in the soil, the rain, the air. Organic foods are not shipped and sold in isolation. There are many stages at which they may become contaminated with pesticides. Indeed, organic foods may also have pesticides deliberately applied during the growing process. Pesticides are allowable in organic farming, provided that they are not synthetic. For a list of permitted substances in organic farming see this from the Government of Canada.

Before we all give-up on organic produce, it’s worth considering a couple of things. One, it appears that the number of samples was quite small (the image at the bottom of the CBC article shows a sample size of 30 for the grapes). This could mean that the numbers are not an accurate reflection of the state of pesticide residue in produce in Canada. Two, only 1.8% of organic samples exceeded allowable limits for pesticides; 4.7% of non-organic samples did. In fact, less than half of the samples of organic produce tested positive for pesticides at all. While 78.4% of non-organic produce tested positive. Considering the numerous opportunities for organic produce to becomes contaminated with pesticides the number showing residue is actually quite small.

Yes, you’re taking a risk that your food is going to be contaminated with pesticides. That risk is present whether you choose organic or not. However, that risk is considerably greater if you choose non-organic produce. It’s also worth taking into consideration that by choosing organic produce you’re choosing to have fewer synthetic pesticides put into the environment. Over time, this may mean that your organic food will be less and less likely to be contaminated with synthetic pesticides. 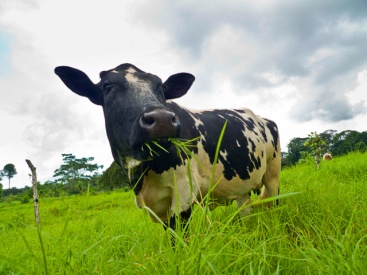 Last week it was all over the news that organic milk is nutritionally superior to conventional milk. Don’t you just hate that non-organic is commonly known as “conventional”? When did the use of pesticides, herbicides, insecticides, and genetic modification become conventional anyway? I really think that we should have a more nefarious name for it. Anyway… I digress. The purpose of this post is not actually to bash non-organic farming. Nope, not today. Today I want to rant about this study.

First off, who sponsored the research? Oh, just CROPP, only the “nation’s largest and most successful organic farmer cooperative” according to their website. Oh sure, they had no influence over the design and results of the study but do you think it would have been published if it hadn’t found that organic milk was superior to non-organic milk? This is not unbiased research.

As the researchers point out, there was a great deal of seasonal variability in the fat-profile of the organic milk. This indicated that the increased omega-3, and decreased omega-6, was more likely a result of consumption of a grass and forage based diet rather than a grain-based diet. Basically, the miniscule benefit from consuming organic milk is a result of the diet composition, not the fact that it was organic.

I’m a big supporter of organic food and products. However, from a nutritional standpoint, there is little reason to choose organic milk over non-organic. There may, however, be some reason to choose grass-fed dairy products over grain-fed dairy.

Is it true that organic food consumers are self righteous? A new study provides some evidence to support this theory. The researchers simply had people look at photos of organic food or “comfort” food or non-comfort food. They then asked participants to judge fictional situations and how much time they would devote to helping a stranger. It was found that those individuals who were exposed to the organic foods judged others more harshly than those in the other two groups. It was also found that they were less willing to devote time to assisting a stranger (13 minutes) than those in the other groups (24 minutes for the comfort food group and 19 minutes for the control group). The author of the study surmised that the exposure to organic foods somehow made people feel superior and as if they had already done their good deed so they didn’t need to devote as much time to helping a stranger as those in the other groups.

I wish I was able to access the journal article without paying an arm and a leg. Sadly, I can’t so I’m going to have to speculate a little here. I wonder what the organic foods were that were shown to the study participants. It sounds like they were packaged foods with “moral” names such as “Honest Tea, Purity Life, and Smart Balance”. I doubt the same result would have been seen if participants were exposed to organic fruits and vegetables. Also, the “comfort” foods used sound more like indulgences to me. They used things like cookies and brownies. I wonder if this group was seemingly more altruistic because they felt guilty about their exposure to these treats. And how were the neutral foods chosen? Oatmeal definitely sounds like a comfort food to me. I’d like to see how a group with no food exposure would respond to the scenarios.