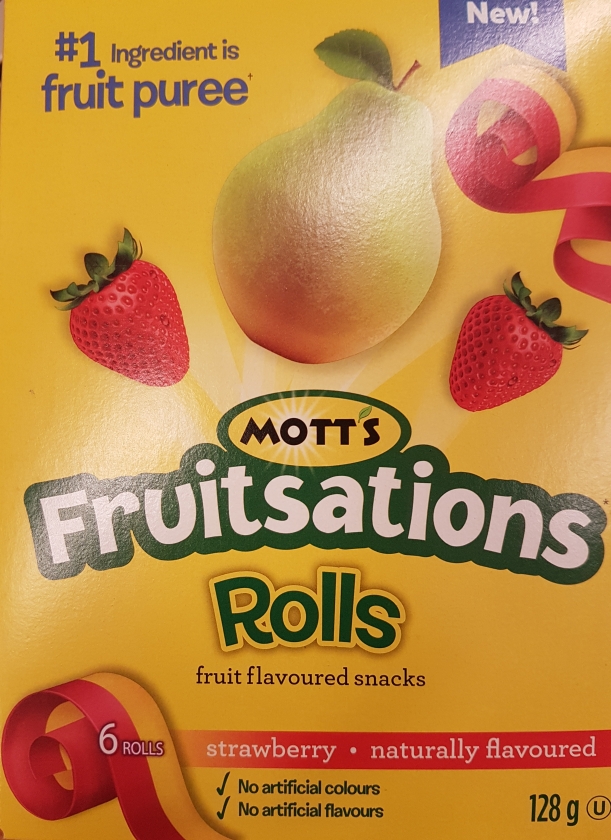 It’s has recently come to my attention that some moms are blithely sending their kids to school with these new “fruit roll-ups” as the result of a mistaken belief that they are “healthy”.

Before I start dissecting these “fruit” snacks, let me first get this out of the way: healthy eating is complicated. Food is not “bad” or “good”; it has no moral value. And no one food is going to make or break a nutritious balanced diet.

It’s difficult to compare the nutrition information for the two products as the serving size for the Mott’s product is 21 grams while the serving size for the classic fruit roll-up is 14 grams. However, (spoiler alert) they are both essentially sugar. Actually, in a surprise twist, the “traditional” fruit roll-up is actually slightly more nutritious than the new “healthy” Mott’s version. It’s has about two grams less of sugar per 7 gram serving and has 2 grams of fibre, whereas the Mott’s roll has no fibre. For further comparisons, again, see for yourself: 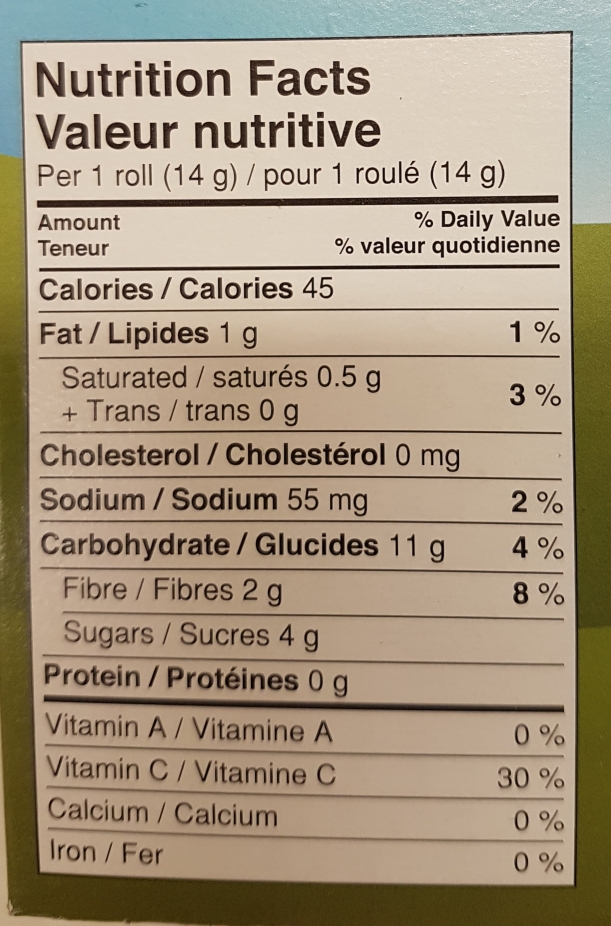 The moral of the story here is not that Fruit Roll-Ups are a nutritious snack. They are not comparable to whole fruit. They are still just sticky concentrated sugar, ideal for literally rotting kids teeth. It’s that food companies are fantastic at marketing and convincing us that their products are far better for us (and our children in many cases) are better for us than they truly are. What can you do to arm yourself against their clever marketing tactics? Increase your food literacy. Learn how to read nutrition facts labels, and check ingredient lists.

Image by Mike Mozart on Flickr. Used under a Creative Commons Licence.

“Disappointed” doesn’t cover how I felt reading this article from the CBC. I’m used to hearing people blame individuals for being overweight. It’s always frustrating. However, it’s enraging to see a director of a Childhood Obesity Foundation laying the blame squarely on the shoulders of parents. He should know better than that.

In the article he says that the government should assume some responsibility for “combating childhood obesity” but that “the buck sort of does stop with the family”. So much no.

Obviously parents want to raise healthy children. Yes, it’s the parents who buy and prepare the food for the household. That doesn’t mean that the onus for “combating childhood obesity” should lie with them.

Our society is designed in such a manner as to make healthy choices incredibly difficult. Forget about combating obesity – can I just say how much I hate that wording? We should be talking about fostering health. The proliferation of cheap calorically dense and nutrient light quick and easy meal options makes the unhealthy choice all too easy. The lack of value on time spent cooking and the over-emphasis on time spent at work makes these options all too appealing. There are myriad reasons that children are overweight and/or unhealthy. Most of which stem from societal issues; not from lack of parents caring and trying to do the best for their children.

Tom Warshawski, the director of the Childhood Obesity Foundation gives three tips for parents to “fight childhood obesity”. The first tip is to “take authority”. Stand-up to the Lunchables and big sodas. Fair enough, until our government stand-up for its citizens and makes these types of food less heavily marketed, affordable and available, it really is down to the parents to try to swim against the tide and limit purchases of such items.

Tip number two, sticking to a recommended diet, is one that makes me cringe a little. It’s that damn four-letter word. Sure, ensuring your child, and you, follow a nutritious diet is important for good health. That doesn’t mean that any specific diet regime need be enforced. Being overly strict about food may backfire and lead to disordered eating later in life. Go for nutritious meals that the family enjoys and let there be treats. Try not to take the pleasure out of eating.

Tip number three is that it’s a family battle. While I wholeheartedly agree that the entire family should be making the same healthy choices, I disagree with the way that this is framed. This is not a battle. If you think about food as a battle then you are always going to lose. Food is not the enemy. Healthy eating isn’t an all or nothing scenario. You don’t all have to give-up chips and pop to be healthy. Parents should lead by example and role model healthy eating behaviours and attitudes. Leading their children into battle against food is not doing this.