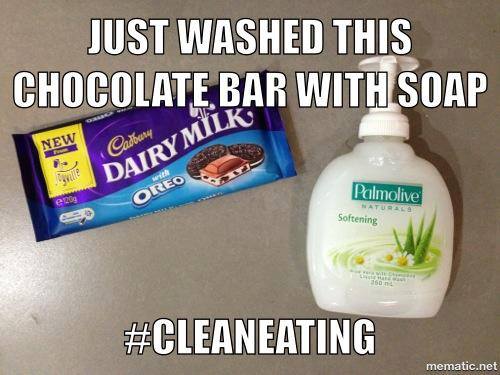 A friend shared this article with me last month. For those of you who can’t be bothered to click links or belong to the TL;DR camp (of which, I’ll admit, I’m a frequent member) let me give you the briefest of synopses. It was about clean eating, why people got so sucked in by the notion, and why it won’t freaking die already.

Reading about all of the self-appointed “clean eating” wellness gurus got me thinking about how many of us who rail against fad diets are also inadvertently complicit in keeping them alive. I see lots of well-intentioned dietitians using hashtags like #cleaneating and #eatclean on their Instagram posts. Personally, I prefer the tag #eatdirty although I don’t think it garners me as many likes as it hasn’t quite caught on in the way that I had hoped. Anyhow… I’m not here to judge my fellow RDs. I’m not even sure how I feel about this myself.

There’s a part of me that thinks it’s good for dietitians to be appropriating the “eat clean” hashtag. By doing so, perhaps they’re reaching people who are all-in on the trendy diet train but who might benefit from seeing sensible nutrition and food suggestions from a nutrition professional. On the other hand, is using these hashtags on Instagram lending legitimacy to them? Isn’t it possible that by using the hashtags, no matter the content, it’s implying that the RD posting supports the notion of clean eating? And for all I know, maybe they do, not all of us are on the same page. But let’s assume that they’re using it, not because they believe in “eating clean” (which means nothing by the way), and not because they’re just trying to get more likes (I know, terribly cynical of me), but because they want to show people who are into “clean eating” a more balanced way of approaching food. Is it cool for dietitians to be using the hashtags for this purpose? Even if it means that it lends an air of legitimacy to a silly fad diet. Does the end justify the means? Or would it be better if we risked only preaching to the choir by using hashtags that truly represent our personal philosophies toward food and our professional opinions?

Something about this article rubbed me the wrong way. And it wasn’t just the ever-shifting arbitrary generation names. But, I have to say, it drives me nuts. I remember when I was just entering my teens, Douglas Coupland’s Generation X came out. Generation X was definitely older than me. Years later, my youngest brother fell into Generation Y, and I was left in some weird void between X and Y. Now, somehow, my brothers are both Millennials, I’m a Gen Xer, and Generation Y has vanished. I just don’t understand how the names and categorization of generations can keep changing. Anyway… End rant one.  Onto the more topical rant for a nutrition blogger.

The article states that a new report shows that Millennials are the only generation (relative to Generation Xers and Baby Boomers) to have bucked the obesity trend. Yes, despite Millennials reporting higher alcohol and cigarette consumption, and lower fruit and vegetable consumption in comparison to the other two currently existing generations.

Apparently Millennials have an obesity rate of 20%, compared to 32% and 33% amongst Gen Xers and Boomers, respectively. Which would seem to be good news on the surface. Is it really though? I’m not sure it has much meaning at all. Most people gain weight as they age so it wouldn’t be all that surprising to see the rates amongst Millennials (provided they don’t keep shifting the damn generations around) increase in a few years.

The article also raises the important point that weight is not necessarily an indicator of health. So what if Millennials aren’t overweight. If they’re leading unhealthy lifestyles I’d say that’s more of a concern than their weight. I’d also hazard a guess that Gen Xers would have lead similarly unhealthy lifestyles, and had lower (than they currently do) rates of obesity when they were the age that Millennials are now.

Then, when I see the way they determined how healthily everyone eats, I wondered about the entire survey. This is what was asked: if they “ate healthy all day yesterday”. That’s so subjective as to be completely meaningless. For one person eating healthy all day might mean eating a plant-based diet. If they also ate some ice cream or chocolate or chips did that mean they didn’t eat “healthy all day”? What about the avid Bulletproof coffee, protein shake drinking person? The juice faster? Or the person who thinks that the salads at McDonald’s are healthy? I just don’t see responses to this question as being meaningful.

So, let’s not get too excited about Millennials beating the obesity crisis or whatever. Let’s focus more on figuring out how to get more people to the place where they’re leading healthier lifestyles and survey makers away from subjective judgemental questions about how healthy people ate on the previous day.